Between Shades of Gray by Ruta Sepetys: In 1941, 15-year-old Lina Vilkas is arrested by the Soviet secret police and deported to Siberia with her mother and younger brother. Lina fights for her life, vowing that if she survives she will honor her family, and the thousands like hers, by burying her complete story in a jar on Lithuanian soil. Lina’s writings and drawings chronicle her fight for survival, her difficulty accepting help from a Soviet guard she’s supposed to hate, and her struggle to retain faith in mankind amidst the terror.

Ruta Sepetys (Rūta Šepetys) is an internationally acclaimed, #1 New York Times bestselling author of historical fiction published in over sixty countries and forty languages. Sepetys is considered a “crossover” novelist as her books are read by both students and adults worldwide. Winner of the Carnegie Medal, Ruta is renowned for giving voice to underrepresented history and those who experienced it. Her books have won or been shortlisted for over forty book prizes, are included on over thirty state reading lists, and are currently in development for film and television.

Librarians across the Monroe County Library System are encouraging everyone to read Between Shades of Gray by Ruta Sepetys, then visit a participating library October 4-8 for a special GRTR program.

Click here here for more information about the Greater Rochester Teen Read and to view the schedule of upcoming programs. 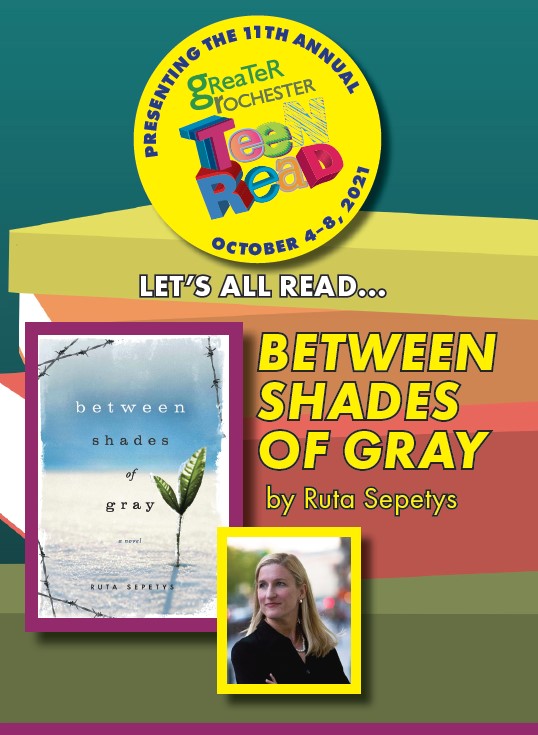